I got a “brilliant” idea this morning at about 6 a.m. while I was trying to decide if I’d be able to go back to sleep. David had to leave early and will be away this week on business. That’s when I decided I ought to pick a project to tackle while he’s away. I often get a second wind in the evenings but I don’t generally take on household tasks at that time because I don’t want David to feel as though he ought to be doing anything else after his often grueling days at work. Other than cleaning up the kitchen after dinner I don’t do much in the way of housework after he gets home.

However, since he’s away this week I thought it would be a good time to take on something extra. I decided to wash, iron and rehang the kitchen curtains, wash those three windows inside and out, and repot at least a few houseplants. I’m embarrassed to say how long those curtains have been hanging unwashed. I’m not sure if you can tell from these pictures but they are a royal pain to iron because of all the ruffles.

This first picture is of the window over my sink. They aren’t visible in the picture but there are shelves on either side which hold decorative items. I take everything out of the windowsill and clean it fairly regularly but it’s been a little while since I did the shelves. Since this is the smallest window, I’ll tackle it first 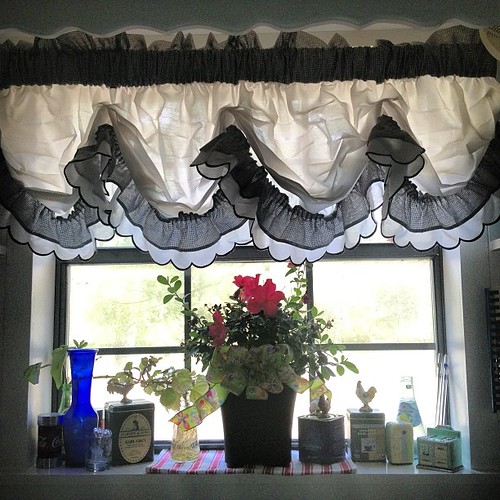 These next two photos are of the windows in the breakfast area. It may be hard to tell from the pictures but the windows are each about five feet square. These will be a much bigger job. I picked up a movie from the library this afternoon so my plan is to set up the ironing board in front of the t.v. so I can have a little entertainment while ironing. 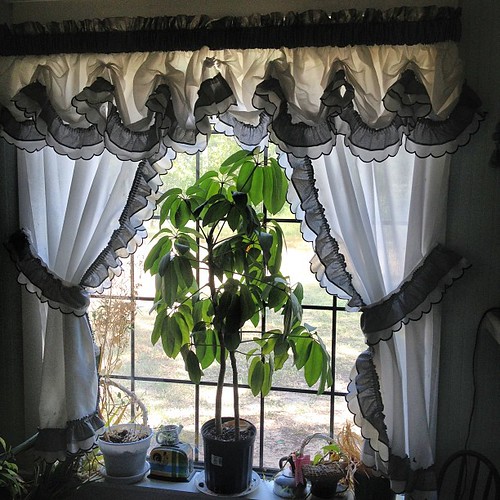 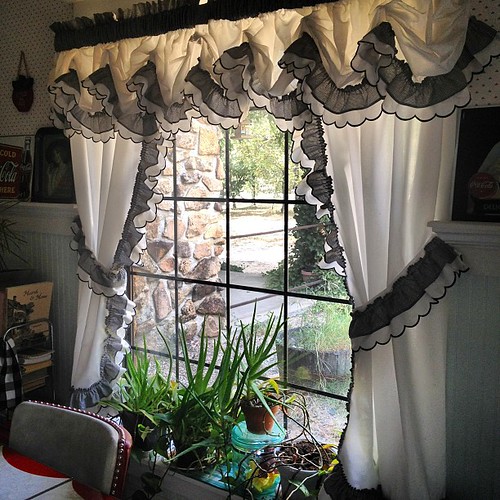 The other thing you don’t see in these photos are all the big plants on the floor in the corner between these last two windows. I don’t know if I’ll get all the plants cleaned up and repotted as needed this week but I’ll tackle the most root-bound first.
If I’m successful in this endeavor then I’ll pick a POW (Project Of the Week) every week. Perhaps not quite as ambitious as this one but something beyond the usual weekly cleaning. I’ll report back the end of the week and let you know how it went.