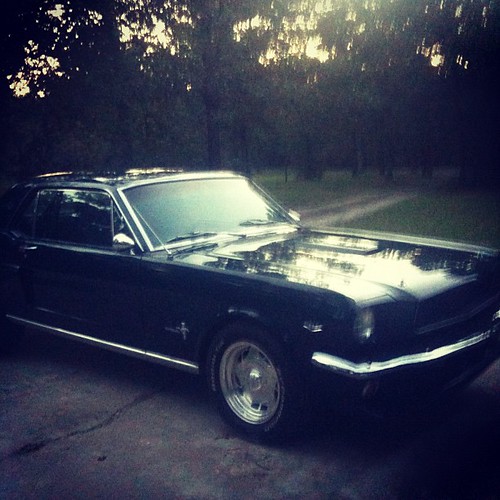 This was David’s first car. He bought it at age 15 and this is the car we dated in. Before our son turned 16, the two of them rebuilt it. Unfortunately they did such a stellar job that it seemed too nice to drive much. Chris ended up driving our old pickup most of the time instead. For the most part it just sits in our garage. I’ve been begging David to take me out in it. A week or two ago, out of the blue, he decided to join the Mustang Club of America. He polished and waxed the beauty and last night he took me out on a date in it. Ah, sweet memories. 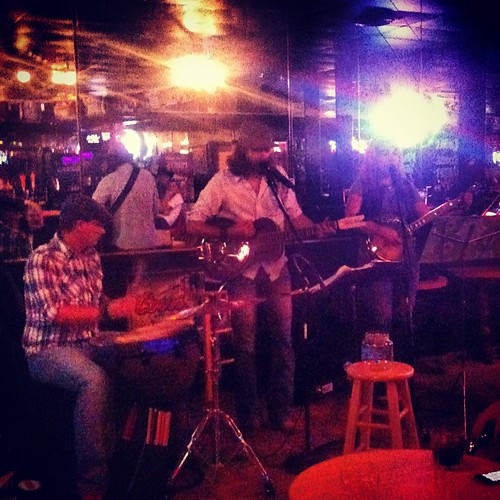 Ordinarily we wouldn’t go out so late on a Thursday but we received a text message from our friend, Aaron, that his band, Rowdy Folk, would be performing. Well, who can turn that down? David was going to take me out for dinner first but I had hamburger that I needed to cook so we (he) grilled burgers and we ate at home first.
David then checked and refilled fluids in the Mustang and started her up. It hadn’t been driven in about 3 years but we crossed our fingers and headed to town. Bear in mind, the car doesn’t have air conditioning. We didn’t think much about that as teenagers in Southern California but we are, ahem, older now and Oklahoma summers can be brutal. However it was actually quite nice last night. David did suggest I not put too much time into fixing my hair since we would be operating the 2/60 a/c – roll down two windows and drive 60 mph. I joked that I needed a silk scarf to tie over my head like the glamourous movie stars of the 50s and 60s.
Something like this:

I didn’t find this charming video until I started looking for something for this post but you can bet I’ll be giving it a try soon. I don’t have any silk head scarves but I did recall that one of the lovely young women who attended our Happyland Music Fest had left one behind (yes, we still have a lot of unclaimed items from that event). I didn’t think she’d mind if I borrowed it so I simply tied it under my chin and off we went. It did keep my hair from going wild in the breeze from open car windows. I think I might be in the market for some vintage scarves now. Ha!

It was a fun night, hanging out with friends and listening to music. I could have done without the raucous cowboys who showed up, though. Well, except for the polite, older gentleman in the black cowboy hat who bought me two drinks during the course of the night. He asked David’s permission, tipped his hat and called me “ma’am”. The rest of them, though? Obnoxious.

But despite the cowboys we had a fantastic night. As we drove home well after midnight (yes, we’re nuts) we enjoyed the cool, night air. The moon was bright and it was pretty much perfect. We shared a kiss in the car before David parked it back in the garage. We may no longer be teenagers but we do still know how to have fun.