David and I long ago made a deliberate decision to have more fun. And for us, music is always a good way to do just that. Very little makes us happier than the opportunity to experience live music. That’s one of the reasons we love New Orleans so much.

We kicked off the weekend by enjoying the new web cam inside Tropical Isle on Bourbon Street. We can now watch our dear friends of Debi and the Deacons whenever they are performing.  Even better, we can post requests on their Facebook page (or text Bryan directly). It was cool to be watching them on my computer, hear them give a shout out to us and then play “No Woman, No Cry”.

Here he is singing it for Roz and me back in October when we took our Thema and Louise road trip:

I hadn’t even requested it Friday night but Bryan knows it’s one of my favorite songs. Of course we’d rather be there sitting on “our stools” (yes, we have a particular spot claimed), listening to them in person and chatting during their breaks but this is certainly better than nothing.

Saturday we headed to Oklahoma City for the 17th Annual Reggae Festival in Bricktown. I had first heard of this about a month ago on our last trip to the city. I LOVE reggae so David made reservations for the Skirvin and I’d been looking forward to it. What we hadn’t originally taken into consideration was the possibility of temperatures approaching those of the surface of the sun. Yikes! It was hot enough to cook your brains and after a couple of hours I was pretty sure that was what was happening. We tried to keep cool under an umbrella on the balcony of Chelino’s Mexican Restaurant overlooking the stage: 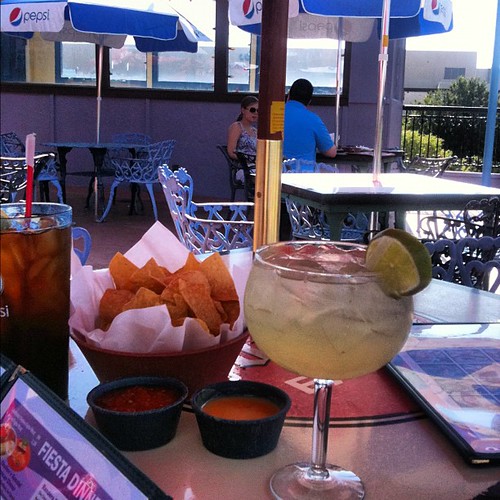 And while the afternoon groups weren’t precisely what I’d call “reggae”, you’ve got to admit that a lead guitarist in floral shorts with suspenders and no shirt is pretty entertaining. (Too bad I didn’t capture a better shot of him.) 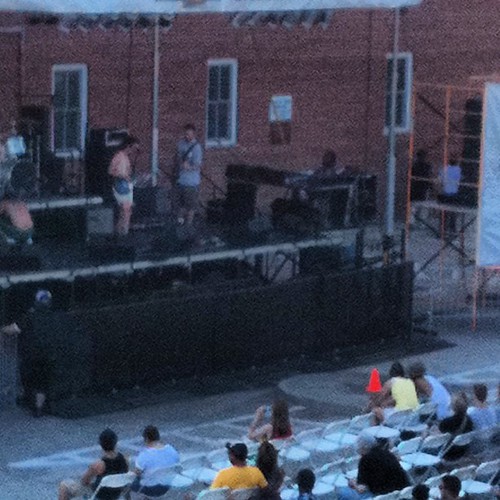 But when it reached the point that I could count my heart rate simply because I could feel it pounding throughout my body at a ridiculous rate, we decided some time cooling off at the Skirvin might be in order. We checked in and rested in our room for a half hour or so before going to the bar downstairs. We chatted with the bartender. She’s going to New Orleans soon and had messaged me on Facebook asking for suggestions. We watched some of the Olympics at the bar and ordered dinner. In honor of the Olympics being hosted in London, I chose fish and chips and David had a pizza in honor of the fact he likes their pizza.

Around 10 p.m. I checked the weather app on my phone and saw that it was down to a nice, cool 90 degrees. Hey, after a couple of hours in temps over 105, that sounded pretty good. We took the hotel limo to Bricktown and enjoyed the next couple of hours of music. As you can tell from the picture above, there weren’t many people for the afternoon groups. Probably because it was 105 freakin’ degrees! But the place was full that night. Everyone was smiling and dancing and jamming to the music. The final group, Local Culture, was quite good and we thoroughly enjoyed the experience. And despite what we’d been led to believe, we only got one whiff of pot during the time we were there. There were actually a lot of families with kids there which I thought was pretty cool. 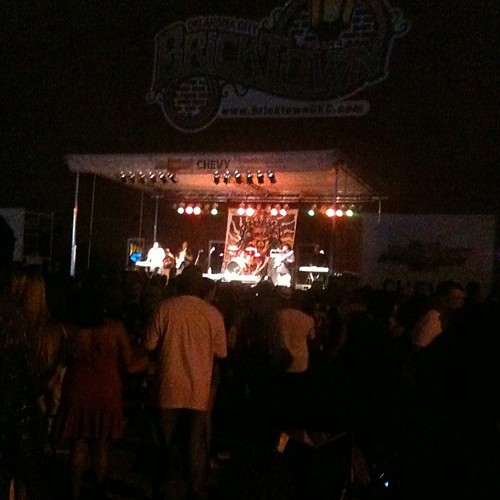 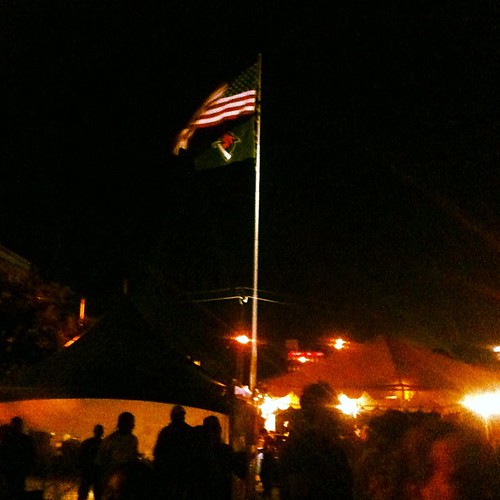 When the show was over we called Mike, the limo driver, to come pick us up. Yes, David has Mike’s number in his phone. We then went back to the Red Piano Lounge for a nightcap, Mad Men-style: 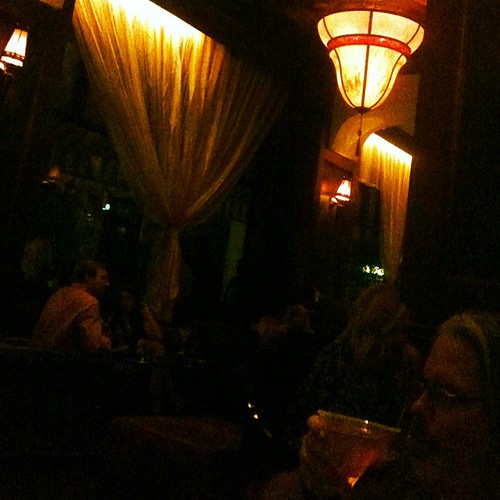 I was taking this next photo of the pianist but I thought it was cool the way our drinks showed up with one of the Instagram filters. For my nosy curious friends, I was drinking a cosmo and David had a sidecar. 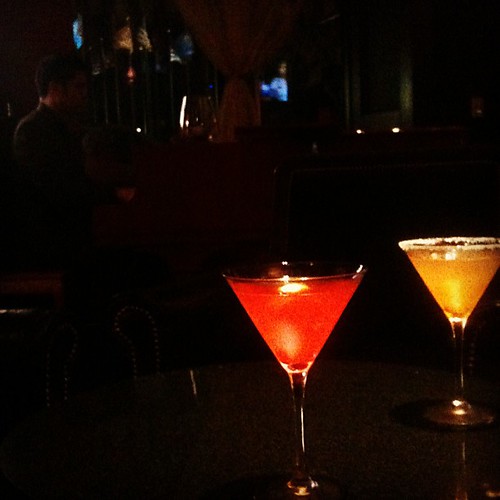 We enjoyed the music, got acquainted with two young women from Dallas who were in town for a horse show, and spent quite awhile talking with one of the servers we’ve known for a long time. She was excited to tell us all about her new job and happy that she got a chance to see us one more time before she quit the Red Piano Lounge. She’s a real sweetheart and we’ll miss her.

We were utterly exhausted when we returned to our room after 1 a.m. That heat really takes it out of you. And perhaps only averaging about 5 hours sleep recently doesn’t help. We slept well and then enjoyed room service the next morning. 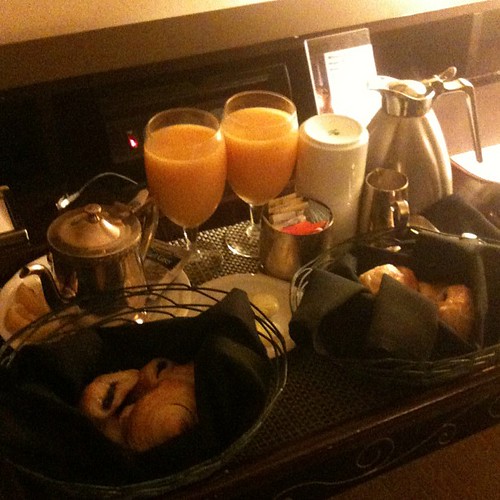 We asked for a late check-out and it was granted. David’s a Hilton Gold Member and as they say, membership has its privileges. We were trying to decide where to eat lunch and David suggested POPS which sounded good to me. One of my cousins lives fairly close and has been begging us to come see them. David called to see if they wanted to meet us there or if we could drop by after we ate. It turned out that they had picked up a bunch of bbq and Sue’s (also my cousin, of course) family, as well as his mom (my Aunt Kay) and husband were coming over to eat with them. They invited us to join them for lunch.

We spent the rest of the afternoon enjoying everyone’s company. We hadn’t seen their house yet (they just moved there in December) and Steve gave us the grand tour, including a ride in their two-seat go-cart to check out their chickens. I so wish I had thought to take pictures. The house and grounds are absolutely spectacular. The house is beautiful but still feels homey, not stiff and formal. And the pool area is to die for. There’s a covered area with a fireplace (which wasn’t needed this weekend!) and a pool house with a shower and kitchenette. All the kids swam most of the afternoon while the adults laughed and shared stories. We had the best time and I’m so glad David thought to call them.

We had boarded Shiloh because Chris was also out of town this weekend. Ordinarily we wouldn’t have been able to pick him up until Monday morning but we happen to be on pretty good terms with our vet and she offered to meet us at let us get him as soon as we got back to town Sunday evening. Stephanie (or should I call her “Dr. Rollins”?) was Chris’ best friend when they were growing up. We lived just a few blocks from one another and our families spent a lot of time together. We are still very good friends with her parents. She was the one who took care of Shiloh and offered him to us because she knew we had been looking for a Great Pyrenees. We will forever be grateful to her for that because, well, look at this face: 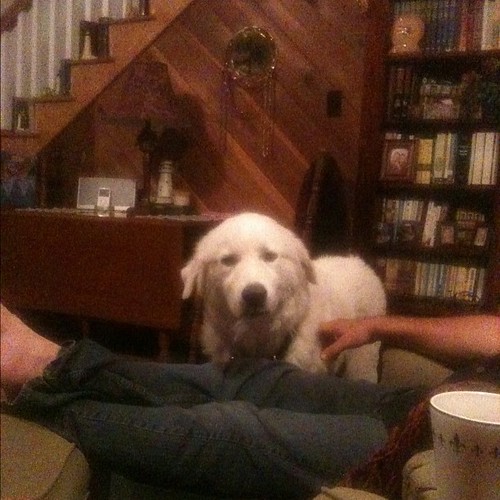 He watched an hour or so of the Olympics with us last night. I don’t think he was all that impressed with women’s gymnastics but I think he’ll enjoy basketball. Or maybe some of the track events.

And because I missed him this weekend…and because David had him bathed and groomed Friday…this is where he’s hanging out today: 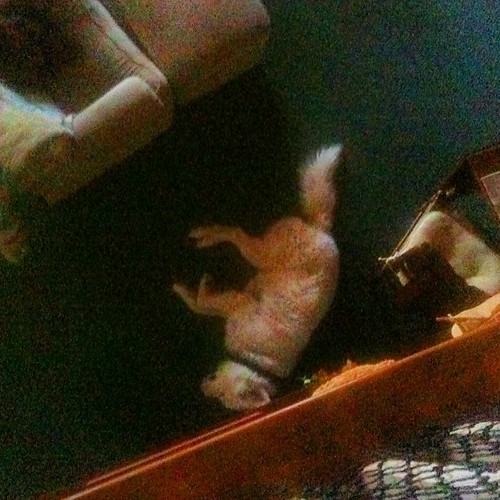