Just a wee glimpse into our life here on Apple Tree Farm.
First up, a close-up of our sweet Shiloh’s precious face. He looks rather serious here: 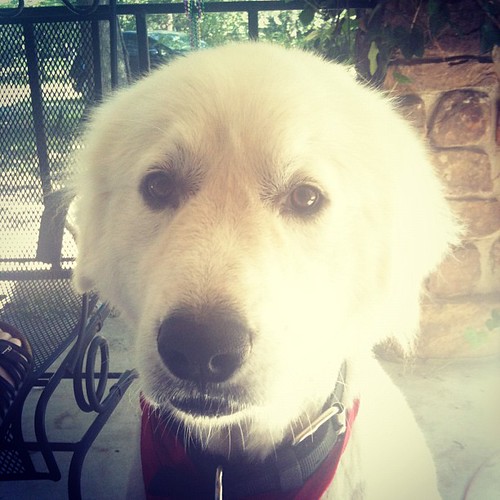 That last one was of him in all his furry glory, just after having the pins and external fixator removed from his leg. A couple of days later, David took him to our local Petsense store to have him groomed. They have been amazing. When Shiloh was first found with his shattered leg and needing major surgery, they held a car wash fund raiser. They also made special tags for his collar – one with his name and another with a fleur de lis – which they gave us free. They had told us to bring him in for grooming after the pins were removed. They spent THREE HOURS on him and did it for free. Good folks.
Here he is after his grooming, totally wiped out:

Yeah, he looks a little ridiculous without all that hair but he’ll be much more comfortable in our 100+ degree summer weather. I must admit, however, that I’m looking forward to seeing him all big and fluffy again. Oh, and that rather disgusting-looking thing on the porch in front of him? The remains of a HUGE bone David bought him as a treat. He thought it would give him something to gnaw on for several days but Shiloh had it pretty much gone by bedtime.

And then there are the cats. Lots and lots of cats. A couple of months ago we “acquired” this fella:

At first he wouldn’t let anyone come any closer than 10 feet from him. As you can see, he got over that nonsense. I will hug him and pet him and name him…Fitzgerald.

Aren’t these the absolute cutest little things?! These are the kittens from our first litter and are sweetness personified. They are also getting rather antsy in the laundry room but at least two are spoken for and will be indoor cats so we are keeping them inside for now. I never know what I’ll find when I walk in the laundry room. A couple of days ago I washed a full load of the towels and small throw rugs I use for the pets. I folded their Downy-scented freshness very neatly and stacked them on the counter only to find most of them scattered on the floor the next day. Oh, well. Who can get mad at these faces?

And then there are the “balcony kittens”. Dharma had her kittens on the balcony just before we went to New Orleans and they resided peacefully up there in a laundry basket. Until they decided to explore the greater world. I saw the first one climb out. I wasn’t sure what to do with them. The two moms aren’t great friends so I didn’t think putting them all together in the laundry room would be a great idea. Plus, Dharma was afraid of Shiloh since she’d never been around a dog before. That’s why she was pretty much living on the balcony and had the kittens there in the first place. I thought about moving them to the front porch but again, since Dharma was afraid of Shiloh and that’s where he hangs out most of the time, I just wasn’t sure how that would work.

David and I talked it over and he convinced me that they wouldn’t be so stupid as to fall off the balcony. Well, I can’t say I was totally convinced but I did make him promise to handle whatever happened as a result of this laissez-faire approach to kitten rearing.

And then it happened. I checked on the kittens early Sunday morning and one was missing! I told David and he went downstairs to see what happened. I feared the worst. But in just a minute he came back upstairs holding a perfectly fine kitten. He had found it asleep on Shiloh on the front porch. We are guessing that it scrambled down one of the vine-covered stone pillars but when it couldn’t go back up, decided to make the best of things with the sweetest dog on the planet.

So now they are living on the front porch. The kittens adore Shiloh so their mama decided he must be okay. I occasionally see them nose to nose, even. He hasn’t *quite* won over Berkeley, Dharma’s brother who is the only other cat here who had never seen a dog before Shiloh, but he’s getting close.

Now tell me that isn’t just the sweetest little face: 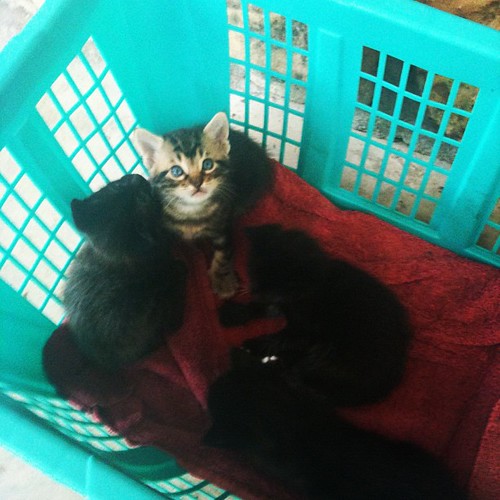 Dharma and a couple of her babies: 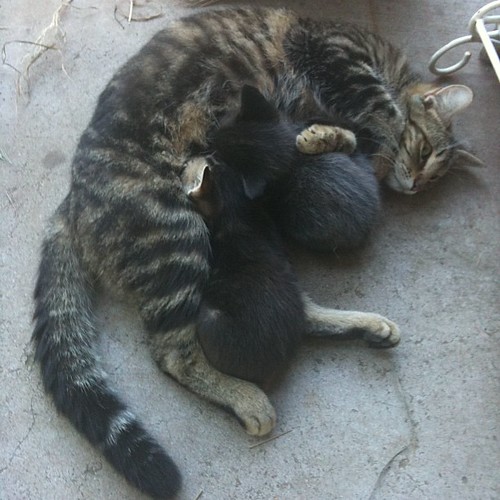 Oh, my! That cuteness is almost too much: 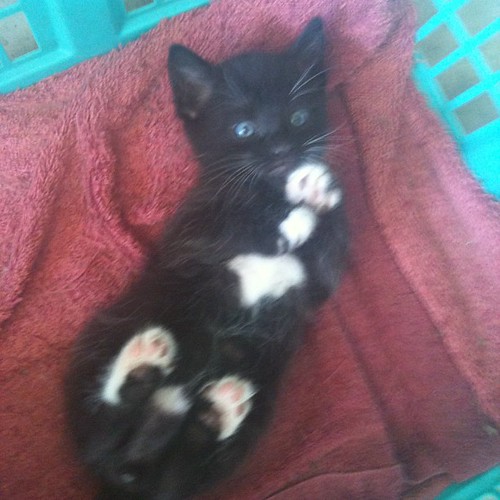 Shiloh and one of his kittens: 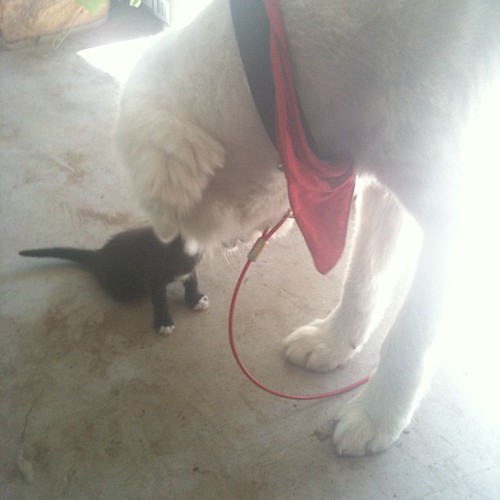 Yeah, I know…crazy cat lady and all that.

Share on TwitterShare on FacebookShare on PinterestShare on LinkedInShare on Email
« I have a wonderful family…
Menu Monday ~ May 21,2012 »